Dinoflagellates are a group of microscopic mostly unicellular algae that are found in freshwater and marine environments worldwide. While we don’t hear much about them in freshwater, dinoflagellates are well known in coastal areas as ‘red tide’ and ‘brown tide’. These are blooms of dinoflagellates that can covers miles of water. Many are non-toxic, but each year, coastal areas around the US are affected by red or brown tides that poison fish and shellfish. They can also cause serious human and animal illness.

Dinoflagellates are fascinating. Their physical appearance, life cycle, and behavior are quite different from other algae. They have chlorophyll – chl a, beta-carotene, and brown xanthophylls which are unique to dinoflagellates – and are photosynthetic, but they also actively eat things. Some marine species are symbiotic with coral (zooanthellae), living within the rigid structure itself. Many are active swimmers, with two flagella that move them in a spiralling pattern. Several marine species are also bioluminescent and can fill their resident bays with glowing blue light at night.

The freshwater dinoflagellates rarely get noticed the way marine species do, but they are present in many Vermont lakes and ponds. Ceratium spp. are some of the most common ones. Ceratium have thick cellulose plates that serve as their cell wall. Their two flagella lie within deep grooves that are clearly visible under the microscope. C. hirundinella, a common species here in Vermont, also has 3 horns that are believed to slow sinking. C. hirundinella is one of the few phytoplankton that exhibit seasonal polymorphism, meaning they change their physical appearance over the season. In this case, as water warms each year in spring and summer, C. hirundinella responds by increasing the lengths of its horns. Like other dinoflagellates, Ceratium are photosynthetic, but will actively hunt and eat small prey like ciliates when needed nutrients are not available in the water. 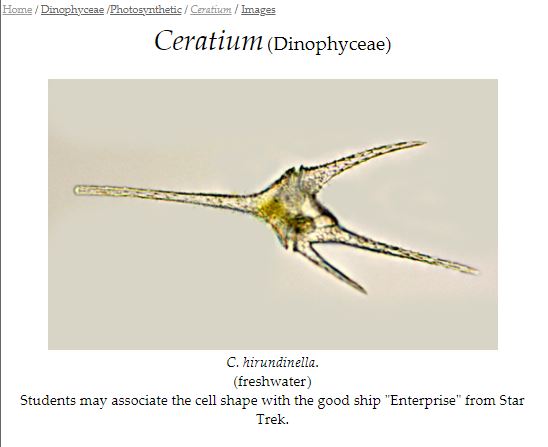