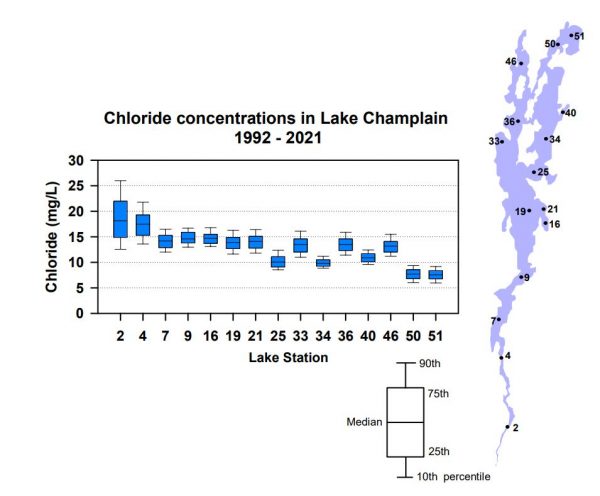 It’s been 15 years since I first began talking about the slow steady increase of chloride in Vermont’s waters. At that time, I was just beginning to dig into the enormous data trove that had been collected by the Champlain Long-term Water Quality Monitoring Project. The program is focused on phosphorus data to support long-term management of Lake Champlain, but also collects chloride concentrations to serve as a marker for water movement through the lake. Monitoring got underway in the mid-90s and there is chloride data for every area of the lake and all major tributaries in the basin.

In 2008, most areas of the lake had around 14 mg/L of chloride. Now, many areas of the lake are 16 – 17 mg/L (see the figure at the right and the VT DEC data from Lake Champlain.) According to the Lake Champlain Basin Program, there are 6.8 trillion gallons of water in the lake. Raising the chloride concentration by 1 mg across much of the lake takes a HUGE amount of salt – thousands of pounds. Chloride concentrations in most natural waters is less than 5mg/L unless they are near the ocean or natural salt deposits.

So, where is the salt coming from?

We know that wastewater contains a lot of salt. People, pets, and livestock all need salt in their food. Industrial processes can use large amounts of salt that also ends up in wastewater. Water softeners remove natural salts from the local water source and the resulting brine is often added to wastewater. However, one of the largest sources of salt in the environment comes from the use of deicing salts during the winter months in the colder areas of the world. Depending on conditions, an application rate between 100 – 300 pounds of dry salt per lane mile during light snow events is recommended (see Clearroads.org). Once it’s applied to the road surface, the salt will dissolve, go with the flow, and reach a waterway. It’s only a matter of time – there are very few biological or chemical processes that will bind up chloride once it has been dissolved.

What does that mean for lakes and ponds?

Many aquatic animals and plants are sensitive to high chloride levels. Some – certain algae, zooplankton, and insect larvae – are harmed at low concentrations. Others won’t be killed when exposed to moderate levels of chloride, but they will be less healthy and stressed. They might not live as long or produce as many young. The lake food web will be affected when more sensitive organisms start to disappear. Larger creatures will have to adapt when their food becomes less abundant. In the long run, a freshwater ecosystem with too much chloride will not be able to support an abundant diverse community. Terrestrial ecosystems suffer from chloride as well.

What is being done to keep chloride out of the water?

The good news is that we can slow the trend and even reverse it by using deicing salts with care. VTrans and many municipal road departments have already adapted their approach to winter road management to use ‘smart salting’ approaches. The use of salt brines, wetted granular salt, and improved mechanical plowing equipment has gone a long way towards reducing the amount of deicing salts applied to Vermont roads. As the cost of deicing material rises, states and municipalities continue to research new ways to physically remove ice and snow that reduces the use of chemical deicers. You can read more about these innovations here.

The next step is to help the lessons learned by states and towns trickle down to property managers, contractors, and home owners. Parking lots, driveways, and other surfaces like bike paths require winter snow removal too. Together, they represent a lot of surface area and we need to be just as careful with deicing salt use at these locations as we do on the roads. UVM Seagrant offers workshops in the fall for contractors and business owners, including the opportunity to become “Smart Salt Certified” Winter Maintenance Professionals. Recordings of the trainings and resources are available on the Seagrant website. 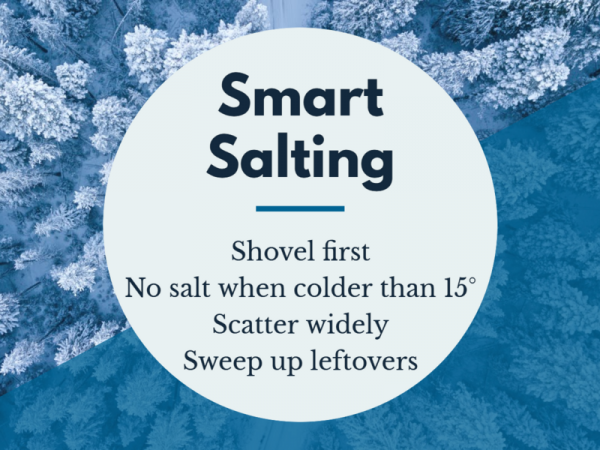 What can you do as a homeowner?

There are alternatives to sodium chloride deicing salt. Products like beet juice and beer production waste are promoted as environmentally friendly alternatives to salt. There is no silver bullet, though. All the alternatives have some type of environmental impact. The Minnesota Pollution Control Agency has a webpage comparing available options and a table outlining potential concerns for each type. In the end, it comes down to using the best product for the conditions and using as little of it as possible to get the job done.

Here is a list of resources if you want to learn more about impacts of deicing salts in the environment:

Share this Seagrant video with others who want to use less deicing salts.