There is one last group of algae that you may encounter in Vermont waters, the Rhodophyta or red algae. Red algae are most abundant in marine environments and are common seaweed along shorelines. The estimates I found noted that only 3 – 5% of all red algae species live in freshwater and most of those are found in flowing waters. Most red algae grow as as filaments, fronds, or single cells. There are no planktonic forms. Some species of marine red algae produce a calcium carbonate skeleton and grow as crusts on rock or other hard surfaces. 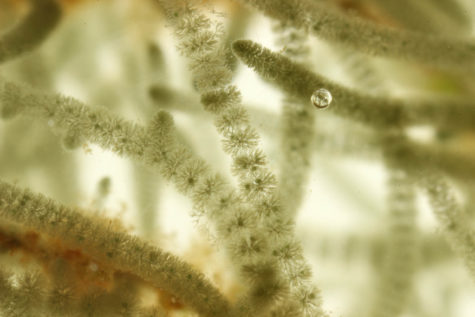 Red algae get their name from their name from the photosynthetic pigments they produce – phycoerythrin and phycocyanin. These pigments are efficient at low light levels and red algae are often found in shadier deeper locations. They do have chlorophyll as well, but it is hidden by the red pigments. They are eukaryotes and have membrane-bound internal organelles like other algae. Their chloroplasts do not have the ‘stacked’ organization common in other eukaryotic algae and they use floridean starch to store the food produced through photosynthesis.

Marine red algae grow firmly attached in their mature form. Freshwater species typically are also attached. Reproductive cells do not produce flagella or cilia and depend on water currents to carry them away from the parent. Red algae have a unique multi-stage reproduction cycle that may involve one or two stages. The physical appearance of these stages can be so different that many were believed to be separate species up until the 1950s.

Though most red algae species are found in the oceans and estuaries, some are found inland as well. Yellowstone hot springs have several different species of red algae and here in Vermont, I have also seen a few. Batrachospermum is a filamentous form found in coldwater streams. Porphyridium is a single celled species that can grow in moist soil and other similar wet environments. At the DEC, I once received an inquiry about rain water collected from a roof in southern Vermont turning red in the 5 gallon pails used to store it. A closer look showed the rainwater was supporting a dense growth of single-cell algae that appeared to be Porphyridium. How it came to be growing on the house roof is a mystery! 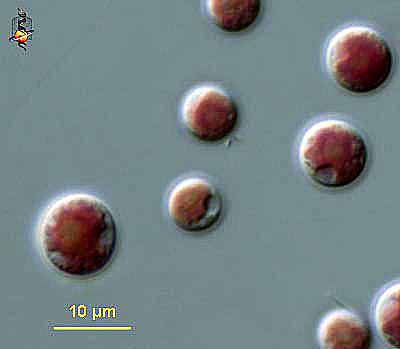