I just realized that I missed an important group in my recent posts about our algae neighbors – the Ochrophytes (formerly called Chrysophytes). They are an important group of algae in both freshwater and marine ecosystems, and common in Vermont lakes. They are one of my favorite groups and I am excited to introduce them as some of your lake neighbors.

The Ochrophytes are a large group with many very different forms. Many are flagellated, moving with 2 unequally sized flagella. Many also have silica cell walls or scales sometime during their life cycle. They produce their food through photosynthesis, using primarily chlorophylls a and c. Their golden yellow color is due to another pigment, fucoxanthin. Unlike other algae, they store the food they produce as oils or the polysaccharide chrysolaminarin. All of them produce resting spores called cysts at some stage in their life cycle. Taxonomy for this group, like many other algae, is always changing. Currently, freshwater Ochrophytes include diatoms, the yellow-green algae, and the the golden algae.

Diatoms (Bacillariophyceae) are very abundant in freshwater and common in most lakes in Vermont. They are an important component of aquatic food webs and are preferred food for many zooplankton. Their outer cell wall, called the frustule, is made of silica (glass). Each species has a characteristic shape and patterning of their frustule. Being microscopic, you can’t see this with your own eyes, but under the microscope their beauty is breathtaking. (Run your pointer over the different species names at diatom.org to see high resolution images of diatom frustules.) The frustule have specialized grooves and mucus that allow diatoms to move (watch a YouTube of gliding diatoms). 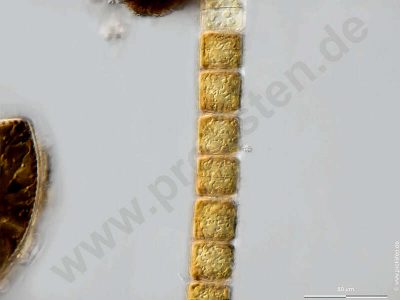 The silica makes diatom frustules very very long lasting. Scientists collecting sediment cores from lake bottoms can use ancient diatoms frustules to help understand what the past lake environment might have been. Victorian naturalists and some modern biologists use diatoms to make microscopic art. You may use diatomaceous earth (fossilized diatoms) in your garden and home to repel insects.

Because the frustule is rigid glass, reproduction in diatoms is complicated. The frustule is made of 2 pieces that fit together like the 2 halves of a petri dish. Most of the time, diatoms clone themselves by splitting their cell into 2 daughters. The new cells each take one half of the parent frustule as the larger ‘lid’ of the petri dish and then grow the missing second piece. That means one daughter is always smaller than their parent since they are getting the inner-fitting piece of the frustule (see Kale and Karthic 2015). Eventually, the smallest daughters are too small and sexual reproduction is triggered. The new cell that forms after sexual reproduction has a full sized frustule, bringing it back up to optimum size before cloning starts to shrink it again. 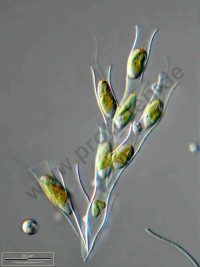 In my work monitoring lake and pond algae in Vermont, I didn’t encounter many of the yellow-green algae (Xanthophyceae). Golden algae (Chrysophyceae), though, were present in many of my samples. One of my favorites is Dinobryon spp. I found many different species in my samples, always in gorgeous pyramid- or tree-shaped colonies. Each of the small vases in the colony contains a single cell. Dinobryon cells have the 2 unequal flagella that are a characteristic of the Ochrophytes, which you can see clearly in the photo to the left. Though you might expect the flagella to push the colony through the water, they in fact pull the cells (watch it in this YouTube video).

Interestingly, there are two toxic algae found in the Ochrophyta – the diatom Pseudo-nitzschia and the golden alga Prymnesium parvum. Pseudo-nitzschia, a marine diatom, produces domoic acid, and regularly is in the news because of mass poisonings of sea life (most recently in September 2022). Prymnesium is a freshwater alga that produces a toxin harmful to fish, young amphibians, and bivalves like mussels and clams. It is found in brackish water as well as fresh. Though less well known than the cyanobacteria, it is also becoming more abundant in certain parts of the world as temperatures and salinities change (see WHOI).

Most Ochrophytes are not harmful, however, and are an abundant, lovely component of the microscopic aquatic world. I hope you enjoy exploring the various sites shared in this post so you can see just how amazing they are.